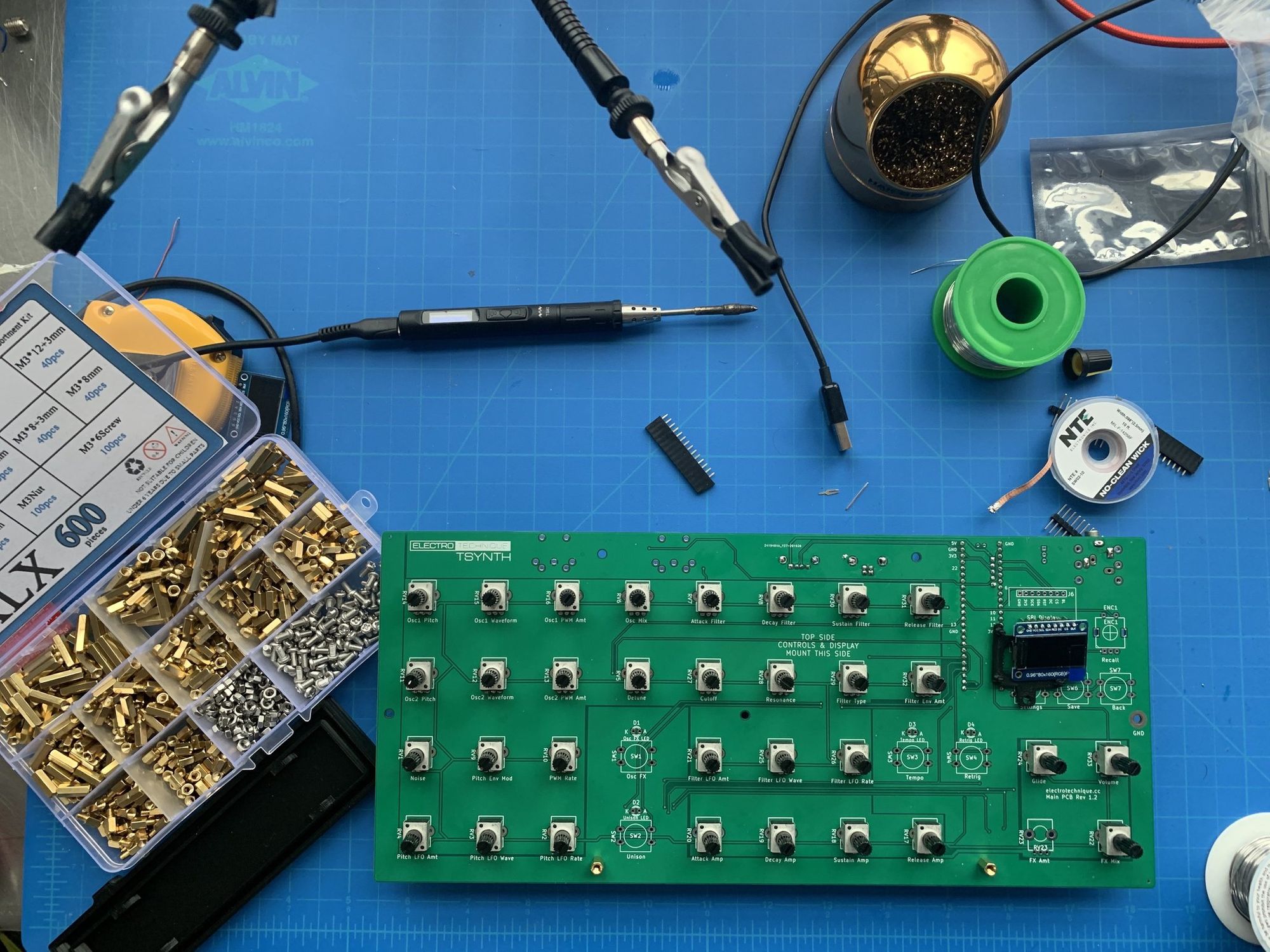 I saw a really well-put together project for a digital polyphonic synthesizer on Tindie recently sold by Electrotechnique. The polyphonic digital synthesizer was really polished and fully-featured plus it had a really reasonable price. I was excited to build one and play with it. Sadly, the kit was sold out. The creator of the project is based in South Korea, and he has a large customer base in the United States. I thought that I perhaps could order boards in bulk through the original designer and then source all the parts to make 10 or so kits to sell to others.

Tindie creates an unintentional drop system by sending an email to all people signed up to be notified when a product is back in stock at the same time. Say 50 people are on the waitlist, but there are only 10 items restocked. The first 10 purchasers will get the kit no matter when they signed up to be notified about restocks. Electrotechnique had 300 or so people interested in batches that he sold off around 20 or so – this isn’t scalable for that waitlist to buy a kit any time soon. We worked out a distribution deal where I would pay for a PCB order and pay him a fixed amount per board then resell those boards primarily in the US market.

This blog series will go through the steps I took to build this kit and get a new kit off the ground. While most of the heavy lifting of designing the product was done, the next steps of sourcing, support, shipping, documentation, and all of the mechanics of getting products to customers remained on my end.

Is this even a good idea?

I looked through the documentation of the project and created a spreadsheet of how much each of the parts would cost from the Bill of Materials (BOM) that described name-brand hardware. The cost was fairly high per unit, but still fairly viable for one-offs or prototypes. Non-name brand BOM equivalents were listed, and can save a lot of money: A standard branded USB socket can cost $1.35 at a US distributor, while you can purchase 10x of those for the same amount from a cheaper supplier. By combining the parts that did not matter and were common: Knobs (33 of them), USB sockets, and some hardware, I was able to come up with a margin that made sense for my time and hopefully a way for people to enjoy building this kit without needing to tediously source parts.

While at this point the idea seemed feasible, in retrospect I made some mistakes:

Lessons learned: Be careful about what you write off as straightforward or easy: if you are offering a product option make sure to do your research on every component and not assume little components or simple screws are easy to purchase. It's often better to leave it out initially. I believe including this product option was a good idea in the end and I’m glad that I was able to inspect the files and re-price the materials before listing the item.

If I had made this project a crowdfunding campaign with Electrotechnique, these problems would have compounded and delays (along with losing money on the project) likely would have resulted. Since the numbers were small, I was able to make a few mistakes and easily eat the cost in both shipping and ordering incorrect components.

Though, some things went well:

1. I was able to determine that I would at least break even if I sold all the stock for a trial run. (not including my time)

2. I included or accounted for many small costs: shipping to me as a seller, cost shipping supplies, platform and payment processing fees, taxes, cost of shipping platform.

This is a part series: